THE BEST SEX EVER 4 episodes from Season 2 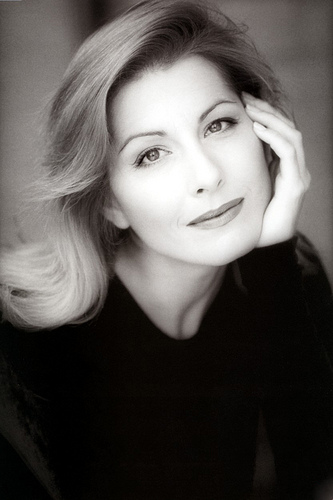 While The Best Sex Ever Season 1 was only released on DVD overseas, it doesn’t look like Season 2 was ever released anywhere. But I found a trusted seller on iOffer, selling a DVD-R of 4 episodes from Season 2, all on one disc, so I snapped that up. The format remained the same from the 1st season, Angela Davies plays Veronica, who hosts a late-night radio show where listeners call in to describe the incident where they had the best sex ever. Once again I’ll rate each episode individually.

“The Seduction of Veronica”
Written by Karen O’Hara, directed by Chris Tudor
This is only the 2nd episode on this series where Veronica herself was the star of the story. She tells her audience about how she was mostly interested in younger men. We get two hot sex scenes of her and her current boytoy, Ben (Chris Evans). He’s great for sex but not much for anything else. Veronica meets Jack (Brad Bartram), a man closer to her own age who is the owner of an art gallery, and they begin getting to know each other, with Veronica at first resisting him because of her age, but eventually she realizes that she’s more attract to his maturity and cultured attitude, and so she dumps Ben for Jack.

“Hot Salsa”
Written by A.G. Lawrence and directed by Chris Tudor
Steven St. Croix and Isabella Gray are a married couple (Roberto and Carmen) who run a latin club together. They were real hot and heavy when they first met (we get flashbacks to their first hook-up), but now Roberto is so consumed with work, that it leaves Carmen feeling sexually frustrated. Eventually they work through their problems and start having sex again, like the early years. Belinda Gavin also stars as a friend of theirs, and she gets a sex scene with Ed Johnson.

This was an average episode. watchable, but not great. Chacebook rating: THREE STARS

“Naughty By Nature”
Written by A.G. Lawrence and directed by Chris Tudor
Jim (Joe Souza aka Matt Dalpiaz) and his wife Amy (Mandy Fisher) go out hiking and camping in the woods. The nature arouses them and we get a scene of them having sex on a bridge. They set up a tent in small area and meet another couple, Ned (Randy Spears) and Valerie (Jewel Valmont aka Ava Vincent), who pull up next to them in a mobile home. We get a shot of them having sex too. Later, when Ned and Valerie are off hiking, Jim and Amy go into their mobile home and have sex. Ned and Valerie come back and catch them, but aren’t upset about it. That night around a campfire, the two couples have sex in front of each other.

“Bad Boys”
Written by Karen O’Hara, directed by Chris Tudor
Chloe plays Stephanie, who calls into the show to talk about how she’s always gone after “bad boys.” She was dating Alex (Evan Stone) who is a badass biker. She likes his reckless attitude. But when a new guy named Mike (Ken Burke) moves into the apartment next to hers she finds herself becoming interested in him even though he’s a “nice guy”, the exact opposite of Alex, and thinks he probably wouldn’t be exciting enough for her. But when she catches Alex in bed with another woman (Alexa Rae), she breaks up with him and goes to Mike for comfort, and they end up having sex, with Chloe revealing to Angela that she’s been happy with him ever since.

Not as good as box-set of the full series, and there were several episodes from the 2nd series that were hotter than these that I would still like to have on DVD, but I’ll take what I can get.