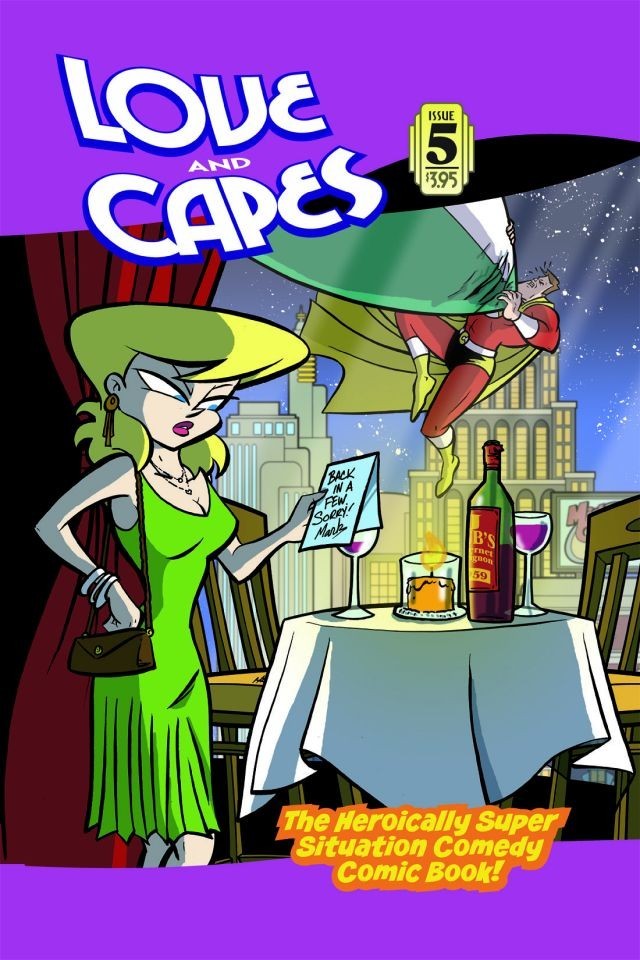 With Abby’s play and Mark’s mom dropping into town, when’s a Superhero supposed to get some free time with his lady? As more and more problems pile up, an undecipherable prophecy is given to the Crusader. Will he figure it out before it comes to pass?

So as this story opens, The Crusader and Darkblade are dropping off a couple of criminals to the Deco City police, and then Crusader and switch back to Mark and make it to Abby’s play on time. He gets there a little late and the after the play he and Charlotte meet Abby and the rest of the cast at a bar for an after-party. Mark and Abby ruminate over how they barely have time for each other anymore, between Abby’s work at the bookstore and rehearsing for the play, and Mark’s superheroics as the Crusader. That’s a running a them of this book, as over the course of the next week wee them trying to arrange a picnic in the park but each day Mark has to either leave immediately or can’t even make it because of some super-emergency that pops up (plane crash, giant stone monster, the usual stuff). Then Mark’s parents come to town to visit, so Mark and Abby show them around the city. Abby is convinced that Mark’s mother doesn’t really like her, and so she tries to win her over while the mother keeps making a bunch of back-handed compliments. But then Abby and Mark finally do get a romantic moment alone. And things are better…for a little bit.

This is another great issue which really highlights what’s I love so much about this series, it contains typical relationship issues, but wrapped around a superhero series, and it all feels completely natural. Abby and Mark could be any other couple who have trouble finding time together because of work, it’s just Mark’s “work” happens to be saving the world on a regular basis. There are also some great character moments between Abby and Charlotte in this issue. Another highly recommend installment of this underrated series. Chacebook rating: 5 STARS