Paris: The Devil Made Me Do It 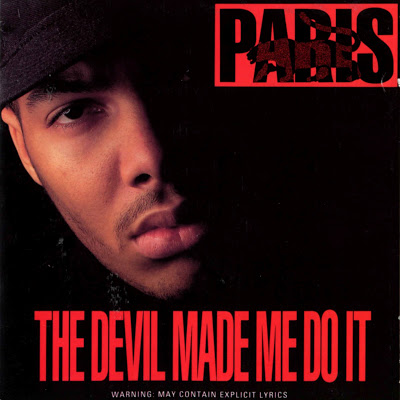 Originally released in 1990 on Tommy Boy Records this is the debut album from rapper PARIS, who was just 23 years old at the time. A Muslim who identified with the Black Panther Party, Paris came forth with hard-hitting Pro-Black raps, over mostly sparse but powerful beats.

SCARFACE GROOVE
Lot of knowledge on the microphone when I speak/Rabbit MC’s I love to eat, Shockin’ with the rhyme, gettin’ sicker with time, I’m comin’ way too real and I’m blowin’ your mind
This is an uptempo track, with Paris rapping braggadocio rhymes, not typical of the socially conscious lyrics that he’s known for, but it shows that he can hang with any other MC out there.

THIS IS A TEST
A midtempo track with Paris once again spouting braggadocio lyrics, but now he slips in some commentary on the state of radio and the kind of rap that they played at the time.
Black radio shame, pop rap’s to blame/Program your playlist to sound the same/With a disco tempo, cliche intro/Wack rap tracks for commercial shows. He even name-checks LL Cool J and NWA later in the song.

PANTHER POWER
A really powerful track here, beginning with an audio snippet from Bobby Seal and then the beat drops and Paris goes off.
Clear the way for P-Dog the militant, Made to steer and care for the indigent/Power to the people is a serious concept, Panthers prowl when I say to step

BREAK THE GRIP OF SHAME
Remember back when good rap was just a cool dance hit, even though it wasn’t saying shit/Well, them days is gone I don’t play that, Pick the punk and I’ll say like wack

WARNING
This is a short track, just a little over a minute, a rap about young Black boy getting assaulted by a group racist police for no reason, after which the boy decided to get gun to retaliate.
Then boom, boom, boom now shit is equalized, when will when you suckers realize?/Black people simply ain’t havin’ that…We just hit back!
Keep in mind, this was released 24 years ago. Considering recent events in New York (y’all know what I’m talking about) it looks like some people should’ve heeded this warning.

EBONY
Live long, be strong, and you’ll see, That better is a life lived long and carefree/Just stay on a righteous path, you’ll see the truth and won’t have to ask
And uptempo rap with a positive message over a melodic beat.

BRUTAL
This is a particularly interesting song, it’s kind of split in two halves. The first verse has him rapping about the history of the Black Nationalist movement, from Elijah Muhammad, to Malcolm X to the Black Panther Party over a powerful hip-hop beat, and then it suddenly switches to a hard rock beat with guitars and he raps about Black on Black violence and racism. It’s pretty dope.

THE DEVIL MADE ME DO IT
The title track and debut single, best song on the album.

THE HATE THAT HATE MADE
Another short rap, just over a minute, reflecting on the 1989 murder of Yusef Hawkins

MELLOW MADNESS
A nice mellow jazz track, with Paris rapping about some good times (for a change).
It’s a mellow madness in the summer time, Females outside, enjoyin the sunshine
Kickin it live with the knob on ten, Good food and the mood is the peace my friend

I CALL HIM MAD
This is a fast track where Paris praises his DJ, known as DJ Mad, who gets the chance to show off his scratching ability on the turntable.

ESCAPE FROM BABYLON
Brethern heed the call of enlightenment/Of truth, Asiatic discipline’s frightenin’
Some who act dumb embraced by decadence/The weak in the wake of true black militants
A powerful drumbeat punctuates the track here, punctuated by some snippets of Farrakhan speeches.

WRETCHED
Again I start this, but I’ll add a new twist,So the masses can’t resist/The message brought by a Panther strictly,To relieve the disease of the sickly
So long your mind’s been trapped, Slave cause you’re shamed to be black/Ignorant of the purpose of the, Plan to keep the Black man down under

Overall this is a solid album that is hard to believe it is his first. He already sounds like a seasoned veteran here. IF Eldridge Cleaver had been a rapper, this is what he would sound like. Chacebook rating: FIVE STARS

Tagged as: DJ Mad, Guerrilla Funk Recordings, Paris, Paris the rapper, Pro-Black rapper, The Devil Made Me Do It, Tommy Boy Records