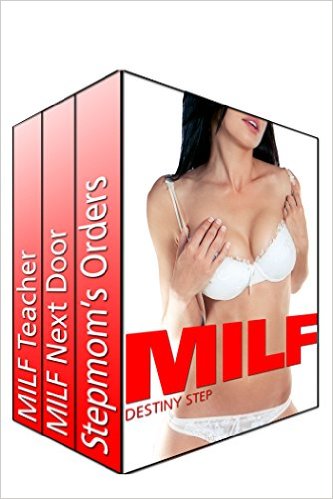 This collection takes three shorts stories written by “Destiny Step”, which had each been previously published separately, and puts them all together for the affordable price of just 99 cents. So I had to try it out.

But Jessica turns the tables, having overheard the plan, so instead she gets Aaron and Kara together and forces them to have have sex, to teach Kara a lesson. She makes Kara blow Aaron again, and then to get Kara ready, Jessica goes down on Kara, getting the girl really hot but stopping just before Kara has an orgasm, and at that point she commands Aaron to fuck Kara. Of course it hurts Kara at first, but soon she gets into it. Plus Jessica plays with Kara’s clit while Aaron fucks Kara, making it feel even better. Even though Kara points out that she’s not on the pill, Jessica demands that Aaron cum inside Kara, which he does. And when it’s all over, Aaron leaves, although Jessica tells him to come back for more the next day.

MILF NEXT STORE
This 48 page story is told from the POV of a conspicuously unidentified woman. By that I mean she never tells us her first name, nor does anyone refer to her by it, only a few pages into the story does someone call her “Miss Baker”, so we know her last name. Well, Miss Baker tells us that she’s in her “early forties” and for the past decade has been living with and raising her now 18-year old stepdaughter Alyssa. Alyssa’s father ran out on both of them (no mention is made of Alyssa’s biological mother), and Miss Baker has raised Alyssa, who calls her “mom”, by herself ever since.

We’re told that a few months earlier Alyssa started dating a 19 year old man named Trevor, and from the minute Alyssa first brought him home, Miss Baker felt instant attraction, and would often find herself looking forward to the times Alyssa brings him over. One days she even listen outside the door as Alyssa give Trevor a blowjob. But eventually Trevor breaks up with Alyssa, and Miss Baker tries to comfort her. Soon after, Trevor comes by one day while Alyssa is out, and Miss Baker lets him in, assuming that he wants to see Alyssa, but he confesses that it’s her that he wants to see.

He grabs her and kisses her, which she gives into, but then he immediately backs off, until she lets him know that she wants it too. They kiss again, she leads him to the bedroom, he grinds his cock against her ass from behind while kissing the back of her neck and reaching around to fondle her breasts. She turns around he takes his pants off and is surprised at his large cock. The biggest she’s ever seen. She goes down on him. Then he goes down on her. And then finally they bang, until Trevor brings her to a full body orgasm

MILF TEACHER
“I want her bad.”
That is how this 46 page story begins. It is written from the POV of 19 year old John. John is in college, but is failing “math.” John has a wealthy father who expects John to take over his business empire some day, but John, like many rich kids, is more interesting in partying and having fun. Well John’s father insists on hiring a tutor to help John do better in school, and that tutor turns out to be 31 year old Miss Grey, and per that opening line, John makes it clear to us how incredibly attracted to her he is, with her light brown hair, blue eyes, and “curvy” body. In fact, right after his first tutoring session with Miss Grey, John has to rush to his bathroom to jack off. Over the next few sessions, where Jessica comes to his house to tutor him, John struggled to pay attention, as his lust for her grew. Then finally one day Miss Grey claims that because her car is in the shop, she needs John to go to her house for their next session. But when John arrives, Miss Grey makes it clear that she has more than math on her mind.

Overall, it’s a decent trio of stories. I question some of the choices for the set up of the stories. Like in the first two, it’s an odd choice to have the adult women be single stepmothers. As I point out, it’s a little odd to have girl living with her stepmother whose not even married to her father anymore. In the first story Jessica could still be married to Kara’s father, but maybe he’s just away on business when all this goes down? Maybe he’s in the army, and serving overseas for the past 3 years or something? At least that would be more realistic (not that “realism” is the highest priority in stories like this…) as to why the two women live together. And in the second story the older woman could have just been Alyssa’s actual mother, not her step-mother.