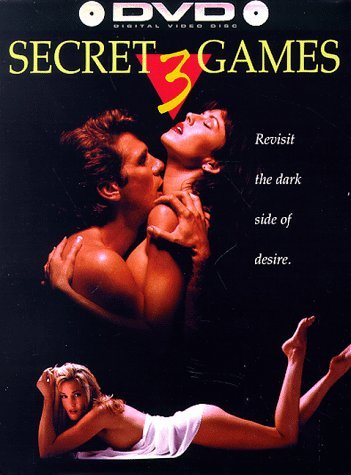 First, don’t worry if you haven’t seen Secret Games 1 (which I will get around to reviewing eventually) or SECRET GAMES 2: THE ESCORT, this is a sequel in name only. This 1994 film, from Axis Films International, is written by Tucker Johnston and Don Simmons, and directed by Alexander Gregory Hippolyte (aka Gregory Dark). Rochelle Swanson, one of the sexiest actresses to ever appear in softcore films, stars as Diana Larsen, a housewife who is married to Alex Larsen (Dean Scofield), a successful surgeon. They’ve just moved into a new home, but Diana is lonely and sexually frustrated, due to Alex always being so busy with his job. As the opening credits role, we see Diana in the bathtub, masturbating as she fantasizes about having sex with a random man. While the movers are loading their furniture into the house, one of her new neighbors, Gwen (May Karasun aka Hollie L. Hummel) stops by an introduces herself. Later, Diana is at a restaurant waiting for Alex to join her and she happens to spot a man sitting by himself (Woody Brown) and starts to fantasize about having sex with him right in the middle of the restaurant. I’ll note that this is within the first 7 minutes of the film, and we’ve already seen two brief sex scene with Swanson, which is awesome. She snaps out of the fantasy when Alex arrives, and they quickly get into an argument about his work.

The next day Gwen comes by to take Diana out, and she takes her to place called Ruthie’s, which turns out to be an exclusive high-end brothel, where wealthy housewives are paid to sleep with rich men, and confidentially is, supposedly, guaranteed for all. Gwen introduces Diana to Ruthie, the owner (played by Brenda Swanson) and she and Diana watch via a TV monitor as Gwen goes into another room and has sex with a strange man. They also change channels and watch another couple, two women (Tammy Parks and Jasae aka Desi DeAngelo aka Elise de Medici).

Afterward, Diana is disgusted and demands that Gwen take her home. But the next day Diana calls Gwen and wants to go back and perhaps give it a try. So they go back, this time Diana is wearing a red wig, and Ruthie sets her up with a new client named Jack (Moe Justini aka Barry Sattels) and they go into a room and have sex. Ruthie watches them on TV from her room, and Terrell, the man Rochelle saw in the restaurant, walks in and joins Ruthie in watching them. Terrell is immediately transfixed by “Rachel”, and the next time Diana goes back to Ruthies, she’s set up with Terrell, but not there. She has to meet him at his place. So she goes there and they have sex.

Even though initially Diana things there may be something odd about Terrell, she continues going to his house to have sex with him when he calls. But then she breaks it off with him when he begins acting too possessive. She finds out that the only other woman from Ruthie’s that Terrell had ever hired was Gwen. And when Gwen refused to see him because he started getting too intense with her, someone shot Gwen’s husband in the leg. Gwen always suspected that Terrell did it, but had no proof. Right around this time, Alex realizes that his marriage isn’t well, so he demands less hours at the hospital, and tells Diana that he’s going to spend more time with her now, and they make passionate love by their fireplace.

So Diana gives up the call girl business, having reconciled with Alex, but that’s when Terrell turns into a psycho stalker, who isn’t ready to give her up so easily…I won’t spoil the ending, but it reaches a thrilling and satisfying conclusion.

But, really, this film is worth watching just for Rochelle Swanson. And director Gregory Dark knows what a commodity she is on screen. Even not counting the full sex scenes we get here, which are all very hot, he gives us several other scenes where Rochelle is either nude or in her underwear, as she takes baths or gets dressed. Great film. FIVE STARS

GET THE UNRATED DVD ON IOFFER