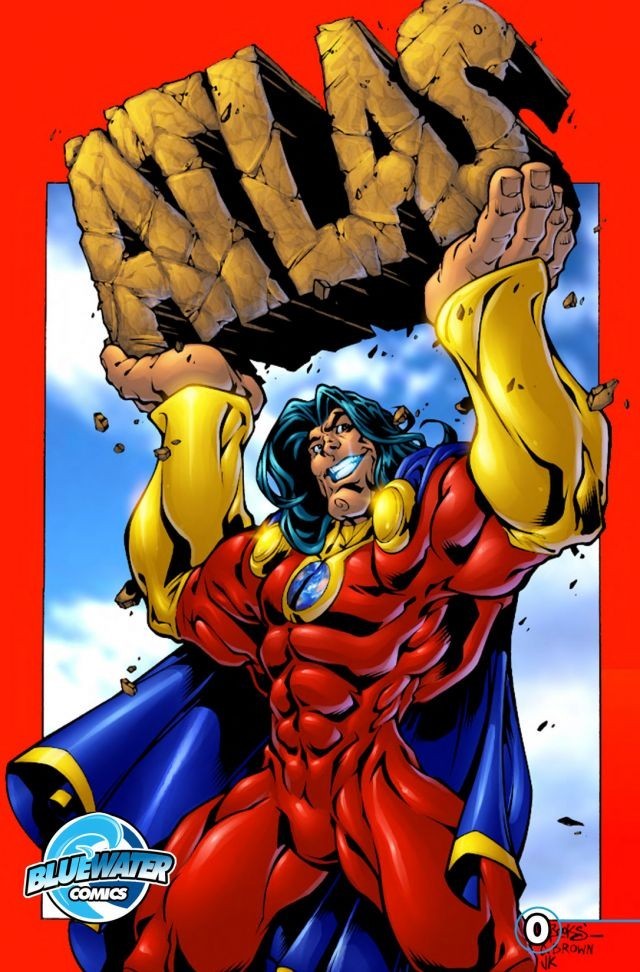 After commanding the Titans in their war against the Olympians, Atlas was forced to hold up the heavens on his shoulders. His life was a tragic story of a lone God fighting boredom on Mount Olympus. However, monitoring the earth from above, Atlas watched Earth change and the emergence of super powered beings donning capes and tights. Growing restless and craving adventure, Atlas decides to take the world in his hands and become one of the Earth’s newest heroes.

I picked this up last night because it caught my eye for two reasons: One, it was FREE! And TWO, it’s written by the legendary Marv Wolfman! Considering Wolfman’s resume as a comic-book writer, I figured this would be worth checking it. This version of Atlas is credited as created by Bluewater Comics’ publisher Darren G. Davis, and this issue is drawn by Mark Brooks.

It opens with Atlas in his mythical position of holding up the world on his back, watching everyone on the planet and bored out of his mind. He happens to see a superhero (called “Super Hero”) in action, and decides that’s what he wants to do. He goes to Mount Olympus and asks Zeus for permission to go to the Earth and become a superhero, which Zeus agrees to because none of the other Gods really like Atlas that much anyway. Atlas, written as extremely naïve and good-hearted, goes down to Venice Beach where he instantly attracts the ladies, and then gets into a fight with their jealous muscle-bound boyfriends. He fights them off and then stops a nearby robbery, announcing to the public that he’s a superhero. He gets mobbed the public, wanting autographs and offering movie deals, so Atlas runs off to get some privacy. He finds a room for rent in a nice house, but a supervillain called Dark Evil is also there to rent the place. So the nice old landlandy offers the room, which has two beds, to both of them. THE END

That’s it. The actual story is 9 pages, and then it’s followed by 20 pages of color and black & white pin-ups of Atlas and other characters by various artists. Not exactly an momentous story, it’s pretty simple, and the tone is mostly humorous. But for what it is, it works. It sets up a status quo for future adventures. And Mark Brooks’ artwork is nice and has an animated feel to it. I could see this working as a cartoon. I wouldn’t pay for this issue, but for a free book it’s worth checking out. Chacebook rating: THREE STARS