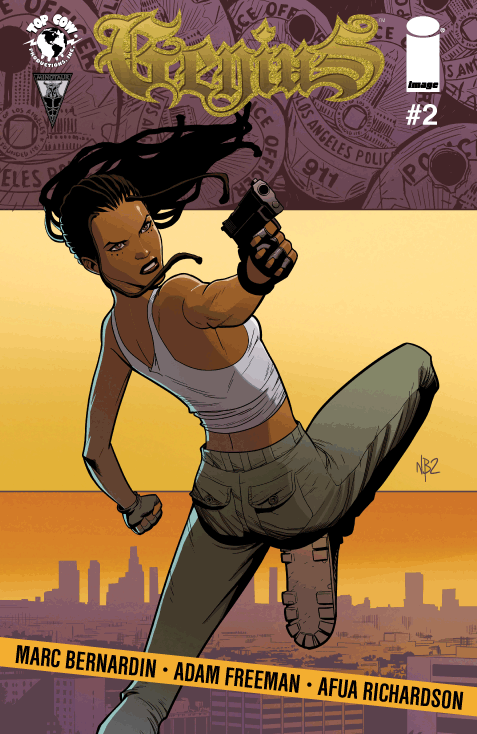 It’s been a long-time coming, but it’s finally here. In May 2013 I reviewed Top Cow’s 2008 Pilot Season winner GENIUS #1, written by Marc Bernardin and Adam Freeman, and drawn by Afua Richardson. This was a book that asked “What if the greatest military mind of our generation was born to a people who are already supremely conditioned to wage war, who know nothing but violence since birth, and must continually adapt to new predators in order to survive? What if the second coming of Alexander the Great, of Genghis Khan, of Napoleon, of Patton…what if it was a teenaged girl from South Central, L.A. named Destiny? And what if she decides to secede three blocks of the ‘Hood from the Union? Who is going to take it back from her and her army of gangbangers? Who CAN?”

Intended to be a 5-part miniseries, it formally began the week before last with the re-printing of Genius #1. They’re releasing it weekly, so issue #2 came out last week. I’m a bit late, but here we go.

Let me tell y’all, Bernardin and Freeman hit the ground running and don’t let up, this issue is packed with action and dramatic tension from first page to the last. South Central L.A. is a virtual war zone, with the LAPD sending all of their SWAT teams and RIOT-control police in to restore order, but they’re getting their asses handed to them by the various gangs that Destiny has united and is remotely controlling. But the police still think it’s just a typical riot, unaware of Destiny’s grand plan. In addition to Destiny our other POV characters are Detective Grey, who’s been building his theory of a charismatic gang-leader orchestrating the violence from behind the scenes, although his theories have thus-far fallen on deaf ears from his superiors. He finds himself huddled in a civilians house during the riot, where he hears the name Destiny for the first time. And there’s also a woman only referred to here as Izzy, who runs a local TV news station that has been covering the violence. Against the advice of everyone she works with, she personally has herself taken by helicopter directly into the heart of South Central to film the violence going on.

Meanwhile Destiny proves to be a brilliant tactician, anticipating and having a counter for every move the police makes. She’s also been broadcasting testimony from local residences about the violence that’s been going on in the hood for years, garnering sympathy from the general public. However, when one of he plans results in the deaths of some of her soldiers, which finds herself facing what could be a revolt…TO BE CONTINUED

Damn. I feel like I needed to take a cold shower after reading this issue, because it’s so hot. The storyline is gripping (and yes, quite timely). I was also greatly impressed by the artwork of Afua Richardson, who was good before but you can clearly see much improvement in work between 2008 and now. A fantastic job by everyone involved.

Buy it NOW on Comixology!