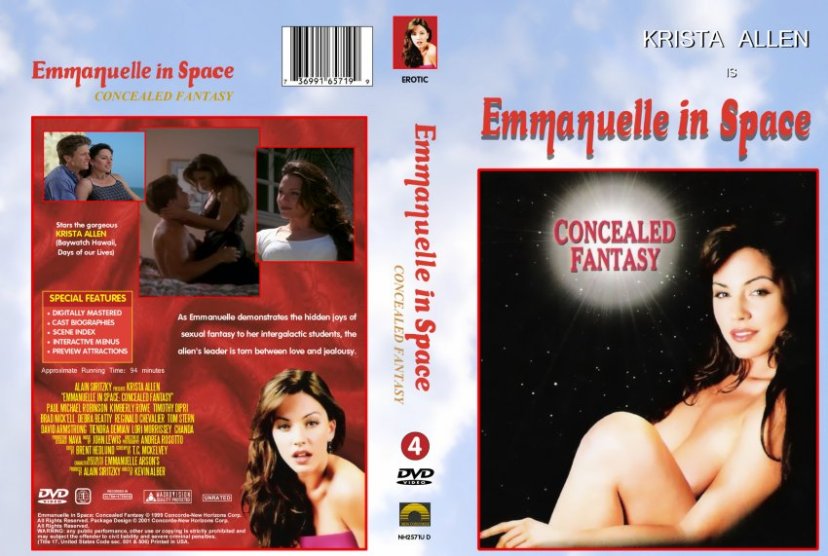 And now here’s my recap and review of the 4th disc from this classic Softcore TV series. Once again produced by Alain Siritzky and directed by Kevin Alber with T.C. McKelvey listed as screenwriter. After the break of the previous disc and its focus on the character of Tasha, this edition returns its attention towards Emmanuelle and Haffron and their growing relationship. This disc also gives us MANY scenes of Krista Allen nude and in various states of undress. So it’s one of my favorite discs of this collection.

It begins with Emmanuelle and Haffron in a hotel in San Francisco, it’s raining heavily outside. They’re dancing in their underwear and then Emmanuelle suggests they go to Hong Kong. So using Haffron’s little device they teleport to Hong Kong and are in a hotel having sex. And then they go to a healthclub and play racquetball. After the game Emmanuelle goes to the locker-room to take a shower, and Haffron meets another woman at the club, Pamela (played by Chandra aka Chanda), and they play racquetball, while the camera cuts back and forth between their game and Emmanuelle naked in the shower, using the showerhead to pleasure herself. Oh my. Then after the game, Pamela comes on to Haffron and they go to her place and have wild sex, which begins on the bed but ends up on the floor.
Later, on a beach with Emmanuelle, they talk about how humans judge others based on physical appearance, with Emmanuelle pointing out that this human form he has chosen happens to be very good-looking. So he transforms into a different man, now played by David Armstrong, who is not as good-looking to see if he can still attract a woman like Pamela. He and Emmanuelle go to a club that night, Pamela is there, but she rejects him in this form. He switches back to his regular form and now she tries to come on to him again, but seeing how shallow she is he rejects her and leaves with Emmanuelle. Back at their hotel we get another sex scene with Haffron and Emmanuelle, they’re on a bed, she’s on top of him and it’s very slow and romantic, ending with a playful pillow-fight.

Next they teleport to Paris. That scene opens with Haffron in bed sleeping, while Emmanuelle takes a shower. She’s in a bathtub which is in the middle of the bathroom, and gets in but stands up and uses the hand-held showerhead to wet her voluptuous body. Then Haffron comes into the room naked, gets in the bathtub with her and starts soaping her up from behind (lucky S.O.B.), then they both sit down in the tub and have sex.
Later they go to a café, where they meet an American businessman named Alan (Hu Beaumont), who starts flirting with Emmanuelle right in front of Haffron, and she seems to reciprocate. Back in their hotel room, Haffron and Emmanuelle argue, as Haffron is acting jealous of her obvious interest in Alan, but she doesn’t like the idea that Haffron thinks he has any say over she’s with.
Later, while Haffron is laying on the bed in his underwear, reading a book, Emmanuelle walks in wearing a black nightgown and gets on top of him and apologizes, and then they have sex. Afterward, while Haffron’s asleep, Emmanuelle sneaks out and meets Alan for drinks and they make plans to meet for dinner. Haffron wakes up and uses his telepathy to see where she is, then in jealousy he finds Alan’s car and flattens all the tires. We get a brief scene of Emmanuelle getting dressed back in the hotel room, an excuse for the camera to pan over her body, and comes out in a fancy dress. Haffron is coming back just as she’s leaving, and she pretends she was going to see him. They go back inside and have sex again. Except just like in Krista’s one sex scene in the last disc, this scene takes place entirely in the dark, so we can barely see them. That sucks!
Anyway, when Alan sees his tires, he assumes Haffron did it, and calls the police. This alerts more secret authorities, as we discover that some mysterious Men In Black-ish organization is aware of Haffron’s existence. We see a random man in a suit checking a government database on a computer, where the screen shows Haffron’s picture, says his name is Haffron Williams and that he’s a “possibly dangerous” extraterrestrial. When they find out that agents are sniffing around looking for them, Haffron and Emmanuelle teleport away, just as a bunch of armed agents burst into their hotel room.

Final episode of the disc has them teleported away to a villa in Ireland. We get another bathtub sex scene with Haffron and Emmanuelle that ends back on the bed. Some shots of them going for a walk holding hands, as they start talking about what their future is. Haffron admits that his feelings for Emmanuelle are growing stronger, but also points out that eventually his mission will be over and he’ll have to go back to his home planet with his crew, and Emmanuelle will stay on Earth. There’s one scene back in their hotel room, where it’s just Haffron and Emmanuelle laying on the floor topless, while talking. The shot feels like just an excuse to show off Krista’s bare breasts, NOT THAT I’M COMPLAINING. And then we get another scene of them having sex in the bed, with her on top (which is always the best position). Throughout the episode there’s a running subplot where Emmanuelle thinks they’re being watched, and we see that some of those government agents have followed them to Ireland somehow. We get one last sex scene of Emmanuelle and Haffron in a bathtub, which ends with Emmanuelle telling Haffron that she loves him. Then we get an attempted ambush by the government agents, but Haffron and Emmanuelle escape again by teleporting back to the spaceship.

So a lot more Krista Allen sex scenes on this disc, which is all good. And she and Paul Michael Robinson must have gotten a lot more comfortable with each other by this point, as their scenes look a lot more intense, especially when they climax. They look like they’re really having orgasms, it’s hot!

Emmanuelle in Space – The Complete Collection