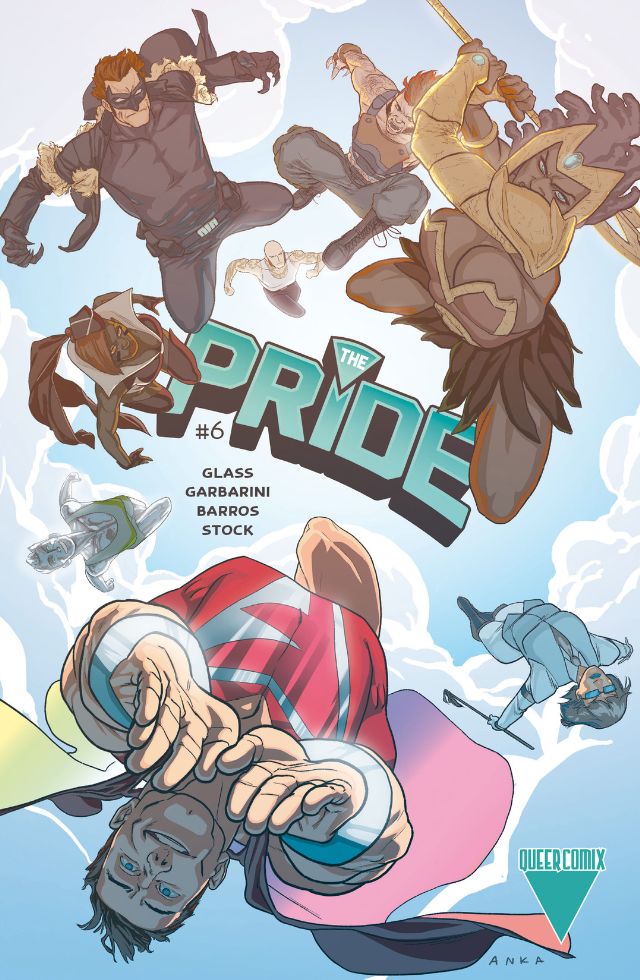 The long-awaited grand finale is finally here! The Pride vs. the Justice Division! The Pride vs. Basher & the Reverend! The Pride vs. the World! Can they possibly survive? And when the dust settles, what will become of FabMan’s dream of a better world for LGBTQ heroes? All this and a few surprises in this final issue of THE PRIDE!

Here is a very long-overdue review. Believe it or not, I actually thought I had reviewed this issue, when it came out last November. It wasn’t until a week ago when I heard about the Kickstarter campaign to collect all 6 issues in a hardcover book (which I am, of course, personally backing) that I noticed that I did not have a review for this issue published. It looks like I started one but left it in draft unfinished. Oops.

Re-reading the issue now, I think I can see why it was a little hard for me to finish this, as there isn’t much I could say without spoilers, which I hate revealing in comics. And there is the fact that this issue is, for most part, a large collection of fight scenes (albeit exciting and well-drawn fight scenes). The Pride, now joined by Bear’s son Jake, who has donned a costume and called himself CUB, must fight off the members of the Justice Division, who are in the thrall of Reverend Phillips, who has some degree of mind-control powers. After defeating the team and freething from the Reverend’s influence, The Pride board their new high-tech air cruiser to confront the Reverend at his secret HQ and take him and the Basher down once and for all, and to retrieve Bear’s body. But when they get there, they find themselves facing an even larger army of superheroes, all being controlled by the Reverend. What follows is a veritable battle-royale, and the stakes couldn’t be higher for our team…

It is quite an exciting and dramatic issue with top-notch action. But writer Joe Glass manages to get in some deep characterization moments within all the fisticuffs, as various team members find themselves facing the morality of their actions as they question whether they’re out for justice or vengeance. Along the way they deal with the ultimate question about superheroes, which we see debated constantly among fans: should the “good guys” kill the “bad guys” and, if so, under what circumstances?

I guess, at this point, anyone who wants to read this series already has, and thus it isn’t the biggest “spoiler” anymore, so I’m going to talk about about a certain fact. Nevertheless…

The team finds Bear’s body, and it turns out that he’s still alive. I was actually disappointed by that. His death was such a shock in THE PRIDE #4 and seeing the team deal with the aftermath in THE PRIDE #5 was done so well, that I feel tha undoing that here is a bit of a cop-out, at least. Death already has no real meaning in mainstream comics, as heroes and villains are killed and brought back on a regular basis. When this series did it, it feel more “real” on an emotional level, and a sign that this was just another superhero comic. I still liked this issue, but I must knock off a point for that. But I do like the encouraging and positive note that this series ended on. And I would be remiss if I did not mention newcomer Maxime Garbarini, who does a fantastic job on the art for this issue, ending this series on an artistic high note as well. Chacebook rating: 4 STARS

Overall The Pride has been a welcome addition to the comic-book industry. I definitely hope that we get to see these characters return.