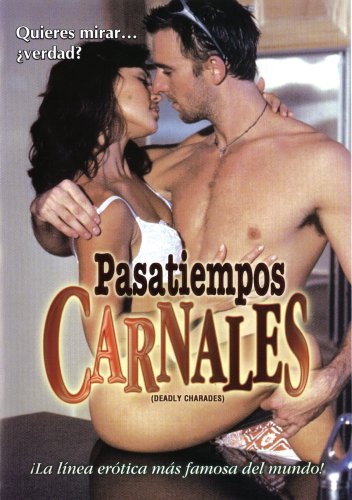 Going old school again, with this 1996 film, which is notable due to it’s leading lady being Lesli Kay Sterling who, a few years later, after starring in several softcore productions including Forbidden Games and Cyberella, would go one to have several long successful runs on several daytime soaps, including The Bold & The Beautiful and As The World Turns. Also appearing in this film, in one of his earliest roles, is Frank Grillo, who has likewise gone on to bigger mainstream work, including appearing in the upcoming films Captain America: Civil War and The Purge: Election Year.

Written by Stephen Johnston and directed by Kelley Cauthen, Deadly Charades is about a married couple, Julie and Guy Sharp (Sterling and Shea Farrell). She’s an art director and he’s a movie producer. As the film begins they’re mostly happy, but have a bit of a disagreement about their sex lives. It seems that Guy prefers for the two of them to engage in role-playing, the opening scene has Julie dressed a cat burglar who breaks into his office late at night, while he plays a security guard who catches her, but she over-powers him and handcuffs him to a couch and then they have sex. But Julie is getting tired of always doing things like that and says she’d like to have sex as just themselves once in awhile. The ongoing plot is that Guy is busy trying to raise funds for his next movie, which is proving difficult. Grillo plays Julie’s assistant Vince, who doesn’t seem to like Guy very much and is attracted to Julie, but he is dating Guy’s secretary Vicki, played by Julie Hughes.

Things start getting a little weird as Guy begins receiving flowers and other little gifts from a secret admirer named “Miss X”, whom he initially assumes is Julie, but she denies it. One day someone breaks into Guy’s office and steals his gun, which he kept in his desk. Then Julie has to go out of town for a brief business trip, and when Guy gets home that night, he finds cancles all in his bedroom with a note from Miss X telling him to get a ready for show. Assuming it is Julie after all, Guy watches as a masked woman comes out of the bathroom to perform a strip-tease for him, then handcuffs him to the bed and they have sex, during which the mask comes off revealing her to be a completely different woman, which shocks him. Afterward, the woman, Sandy (Kimberly Rowe) reveals herself to be an escort, and claims that she was hired by his wife. Guy is pretty sure that’s false, and when he talks to Julie on the phone he figures out that she knows nothing about it (subtly, without letting her know exactly what happened), and tries to call Sandy to meet with her again to figure who really hired her. Sandy invites him to her house, but he gets there, she’s dead, having been shot to death, with his gun sitting next to her body. And that’s when the trouble starts.

I won’t spoil the rest, you’ll have to watch the film to see how this turns out. Like many “erotic thrillers” of the 90’s, this film was well-shot with a cast that was chosen as much for their acting ability as for their looks and willingness to get nude. And I can’t fault any of the cast members here. I do have to say that story-wise, it moves a bit too slow for me. The film is an hour and a half, but it’s not until around 40 minutes into it where their action really starts.  Normally that would lower my rating for the film, but what it lacks in pacing, it makes up for in sex scenes. Lesli Kay has two, and they are both scorching hot. Yes, she shows EVERYTHING. Likewise Julie Hughes has a couple of hot sex scenes, and I enjoyed the one with Kimberly Rowe, especially with the added “bondage” aspect to it. So altogether this film gets a Chacebook rating of 5 STARS.

Unfortunately, this can be a difficult film to find. As I type this, Amazon has ONE UNRATED COPY OF THE DVD, get it while it lasts!