Last May when I reviewed the film KISS OR KILL, I made a point of noting how happy I was to see a softcore film starring a Black woman (in that case, Kira Noir), which I thought was a first of its kind. But a helpful reader alerted me to the existence of this film, made in 2006, which stars former adult film star DEE BAKER, most commonly known as just DEE (as she is credited here). I had seen her before in some softcore TV series, and admittedly I always did just assume that she was Black. But while researching online as I looked for this film, I find out that she’s technically identified as Hispanic, specifically she’s Puerto Rican. But then a lot of Puerto Rican’s have African ancestry. And looking at her IAFD page, she certainly appeared in a lot of adult films with “Black” in the title during her 16-year career (1997-2017). And looking at her, she’s not much lighter than Kira Noir is… 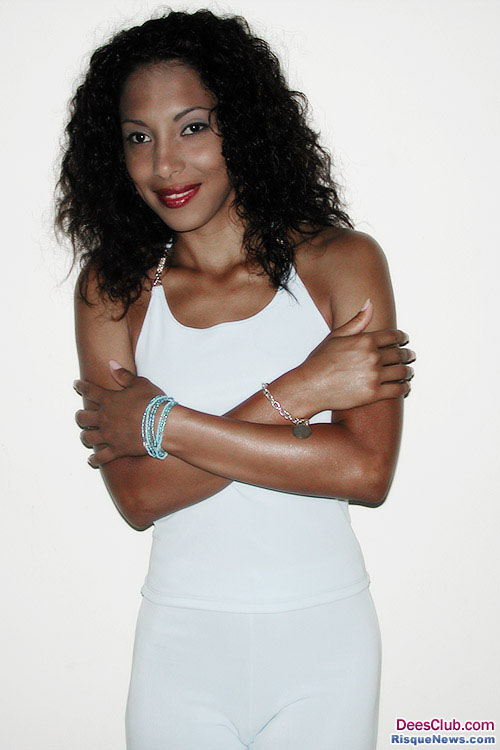 So, at the very least, she’s the first brown-skinned woman to star in a softcore film (how’s that for compromise?).

Written by April White and Edward Gorsuch, and directed by Geoff MacTannish, Dee stars as Nina, a police officer. In the opening moments of the film, she walks in on her husband (Sarge Logan) banging another woman (August Knight) in their bedroom. She kicks him out and goes to work, where she barely has time to process this turn of events in her life before her Captain (Chad Nadolski) informs her that’s she’s given a new assignment. She’s being recruited by the FBI to go undercover on a secret case (I guess all the female agents in the FBI must have been busy at the moment, which is why they needed a local policewoman instead). Randy Spears plays Agent Royce, who will be overseeing Nina on this assignment.

They’re investigating a local modeling agency, which the FBI suspects is involved in some kind of illegal smuggling operation. But that’s all we know as Royce won’t tell Nina what the agency is smuggling, just that its a matter of “national security.” And this assignment is so secret that she can’t even tell her fellow cops what she’s doing, not even her partner Greg (Mark Weiler) And this right there is one of the major problems of this film. It’s literally not even revealed what the crime is until the very end of the film. So we have no idea what the stakes are, and therefor little reason to care.

Legendary former adult film star Lisa Ann played Dana, the owner of this modeling agency. Jack Lawrence played Eddie, Dana’s assistant/enforcer/lover. Stephanie Dawn plays Jasmine, who was one of the models for the agency. Early in the film we see her quitting her job, because she doesn’t like the “extras” that Dana expects of her models, and so Dana has Eddie kill her, and then dispose of her body. Dana tells her other models that Jasmine simply moved away. But it turns out that Jasmine was the FBI’s informant on the case, and that’s why they needed Nina now. Monique Alexander and Chloe Morgan play China and Scarlet, the only other two models we see working at this agency. But apparently Dana’s standards aren’t that high because, despite no professional credits and armed with only some photos that Agent Royce took of her, Dana immediately hires Nina, and soon Nina is doing a photoshoot with China and Scarlet.

For the rest of this film, which is over an hour and half, nothing significant really happens. We see the three models doing photoshoots, and at one point China and Scarlet are sent to a “party” where they’re expected to perform (ie have sex with each other) for some supposedly important client, and Nina has secret meeting with Agent Royce, but there’s still no sense of what this big crime is. Like I said, not until the very end, but by then I don’t even care.

And the other major problem is that most of the actors just aren’t very good. Lisa Ann was my favorite porn star while she was active, but damn, she looks like she’s just repeating memorized lines. There’s no emotion in her voice or face at all. The same goes for Chloe Morgan. Randy Spears is probably the best actor in this film, which isn’t surprising considering his vast experience in hardcore and softcore films. Monique Alexander is also pretty good, and I will give it to Dee that she did alright. But most everyone else just seems to be going through the motions.

We get some nice sex scenes. 10 overall. This is a Mainline Releasing film, so that’s standard for them. Dee has two full sex scenes, one with Randy Spears, and one with Mark Weiler. She also has a solo shower scene. Lisa Ann and Jack Lawrence have a scene together, as do Chloe Morgan and Anton Michael, who plays Josh, the photographer for the modeling agency. Chloe and Monique have two scenes together. One is a full scene with just the two of them in private, the second one is the two of them having sex on a couch while Dino Bravo, who plays the “client” Mr. Marcus, is watching. But when Dino’s character begins to get involved, Chloe’s character gets uncomfortable and leaves, so then he and Monique finish the scene just the two of them. Dino and Monique get together a second time later in the film. And there’s also the scene between Sarge Logan and August Knight, which takes place mostly during the opening credits of the film, so it’s pretty short, less than 3 minutes, before Dee walks in and catches them.

They’re all decent scenes, but not hot enough to make this film really stand out. Overall it’s just a pretty average film, which could have been much better. I’d give it 3 STARS