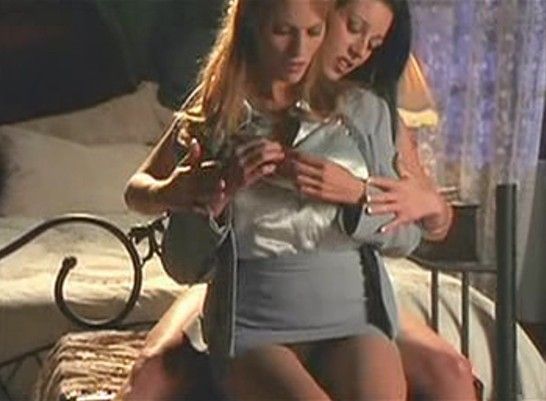 Written by April White and Edward Gorsuch, and directed by R.Lord.

Samantha Phillips guest-stars in this episode as Felicia, a recently-divorced woman who has always wondered what it would be like to have sex with another woman, but had always been two scared to try it. Belle (Kim Sill), introduces her to Juliet (Taimie Hannum), and the two women have sex. Afterward, even though she knows this was just supposed to be acting out a fantasy, Felicia finds herself feeling attached to Juliet. She shows up at Belle’s again for another appointment with Juliet and gets jealous when she sees Juliet watching another woman who works at the mansion, Sandra (Julianna Sterling). The two ladies have a discussion about what’s going on between them, with Juliet trying to get Felicia to just enjoy their experiences together without expecting more.

This is another episode that, based on the plot, should have been much hotter. I don’t know exactly where to place the majority of the blame. I think Samantha Phillips did a fine job as the lead actress, but her and Hannum didn’t have much chemistry, so their scenes together just didn’t quit work. Although some blame has to go to the director, R. Lord, for that, as their two “sex scenes” were really just Hannum going down on Phillips in the first one, and then Phillips going down on Hannum in the 2nd one. And then the threesome with Skosy was mostly Hannum watching while Phillips had sex with him. So they just felt incomplete, like the actors were simply going through the motions. Although the scene between Skosy and Sterling was good. Storywise the “jealousy” angle also felt forced, as did the supposed happy ending with Felicia and Christian getting together. And the nature of Belle’s “business” was also confusing here, as it seems like she’s basically running a bordello.

All in all, just average. Chacebook rating: 3 STARS