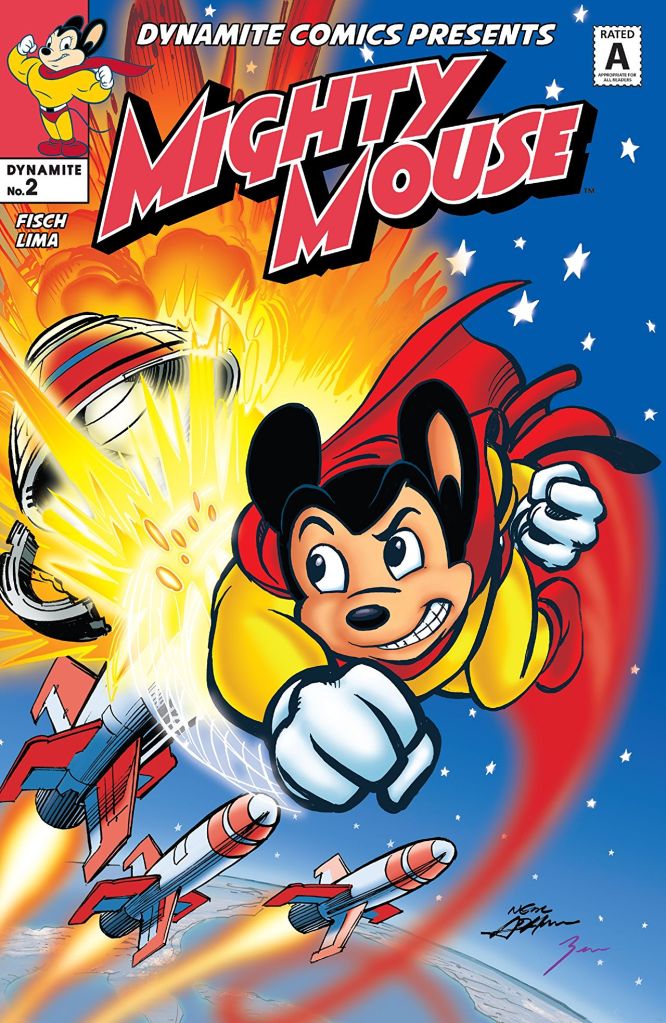 Picking up immediately after the end of the first issue, Mighty Mouse is now real, he’s about 6 inches tall, and facing Joey in Joey’s apartment. Both of them are shocked, and Mighty Mouse immediately attempts to fly back into the TV from whence he came, but all he does is destroy the TV. Before either Joey or Mighty Mouse can figure out what is going on, Mighty Mouse hears a cry for help outside and flies out the window to “save the daaay!”

Joey rushes outside to get Mighty Mouse back, and see the cartoon hero stopping a purse snatcher, to the shock of both the victim and the many bystanders. And, of course, most of those bystanders are armed with smartphones which they use to take pictures of Mighty Mouse with (although, despite the character’s apparently pop culture popularity in this world, no one seems to recognize him). Realizing that this could get greatly out of hand, Joey has to convince Mighty Mouse to get away and come back inside before anyone figures out what’s really going on.

That’s the gist of the plot, minus a surprising cliffhanger, which I will not spoil. But once again writer Sholly Fisch has given us a very fun story. I especially like a sequence where Joey has to warn Mighty Mouse about how to use his powers, as they will have different effects in the “real world” than in the cartoon world that Mighty Mouse comes from. At one point Mighty Mouse is about to punch a bad guy, but Joey stops him, pointing out that, even at his diminutive size, if Mighty Mouse were to punch a regular human with his full super strength, the man will probably be killed. This is shocking to Mighty Mouse, who expected that his punch would simply cause the man to “fly through the air across the city, and land in jail – probably in one of those striped uniforms.” Because, yeah, that is the kind of thing that happened in those old Mighty Mouse cartoons.

The cliffhanger sets up another plot twist, which I’m intrigued to see play out. And artist Igor Lima and colorist Pete Pantazis do another great job illustrating this issue. This is definitely not just nostalgia talking, this book is awesome! Chacebook rating: 5 STARS