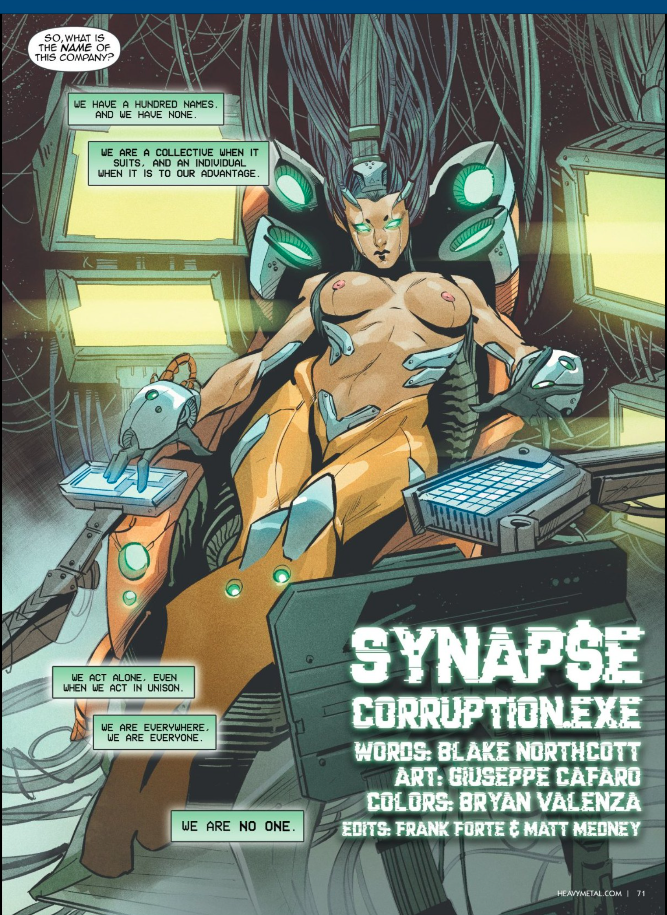 Last September, Blake Northcott wrote a short story called Synapse which appeared in HEAVY METAL #300. I bought the issue just for that one story, and it was worth it. The story was planned as a one-off, so I was pleasantly surprised to hear that Blake had written a follow-up story which appears in this month’s issue of Heavy Metal, #304. So of course I had to get this issue too!

Blake is once again joined by her previous collaborators, artist Giuseppe Cafaro and colorist Bryan Valenza for this 8-page story, it’s not really a direct follow-up, in fact, you don’t need to have read the previous story first. But it’s set in the same futuristic Toronto, and the company Hexcorps. also features prominently in it. A woman has contacted a covert organization with vast resources to get revenge for her on her ex-husband who cheated on her. Using the internet and the help of an “auxiliary” of anonymous assistants, an ingenious plan is put into action that will systematically destroy the man’s life beyond repair. But the price she pays for this task is much higher than just money.

Once again Blake manages to fill a novel’s worth of story into just 8-pages, stories like this are where her knack for world-building shines through. And Cafaro and Valenza are the perfect artistic collaborators to bring this world to life. I was very satisfied. Chacebook rating: FIVE STARS

Of course, that’s not the only story that appears in this issue. There are a few others that stood out to me, which I’ll mention while I’m at it.

BACKUP is a 16-page story written by Hal Jay Green and drawn by Joel Ojeda about a woman stranded in space on a spaceship with only her small AI robot companion. It’s a very touching story about loneliness and family.

Ron Marz writes a one-page story called STORY TIME, which gives us a new twist on Santa Claus and is drawn by Bart Sears.

A PERFECT PAST is a 6-page story written by Joshua Sky and drawn by Livio Ramondelli, about a man who wants to use technology to rewrite his painful memories. But should he?

Benton Jew writes and draws a 2-page story called VIRAL, which I can’t really describe, except that it’s based on a visual gag. But, trust me, it’s clever

And FORGIVE US OUR SINS is a 6-page story written by Mark McCann and drawn by Boo Cook. I would classify this as a sci-fi horror story, taking place in a secret government lab where an experiment goes very wrong.

If you like exciting sci-fi stories with gorgeous artwork, check out Heavy Metal magazine #304.