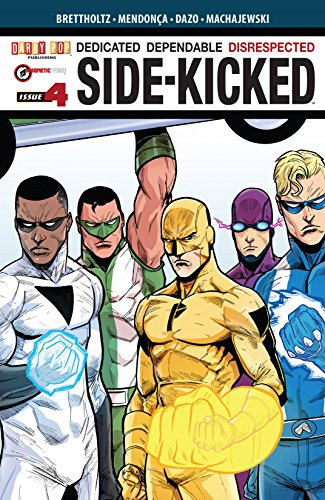 Russell Bretholtz (who co-created these characters with Miguel Mendonca) writes this final issue of this miniseries, with art provided by the Late Bong Dazo, from Darby Pop Publishing and Magnetic Press, and I must say that the end this series with a bang!

I really can’t say too much without spoiling the story. But this is the most action-packed issue of the series. After Mr. Marvelous was left in a hospital by Crimson, the brutal leader of the Board of Directors, the alliance of Chicago’s supervillains, he finally asked Richard, his sidekick Phantasm, for help. This is what the sidekicks wanted, and they finally don their costumes again and set out to round up and defeat the villains who have taken over the city. Do they succeed?

Well, DUH, of course they do, they’re the heroes!

Okay, but I won’t spoil how they do it. Nor will I spoil the plot twist at the end, which hints at further stories to come, even as it comes full circle to complete this adventure and leave the readers satisfied.

At just 4-issues, the story was concise, with no “padding”, which is a problem in far too many traditional comic-book stories these days. This is exactly the kind of story you couldn’t really do with mainstream superheroes, but it’s fun to explore in this alternate universe. Bretholtz shows he has a unique voice in this genre. And while it’s a shame that I’m only just now discovering Bong Dazo’s artwork in this series, years after his death, he was a talented individual whose contribution to this series helps make it worth reading.