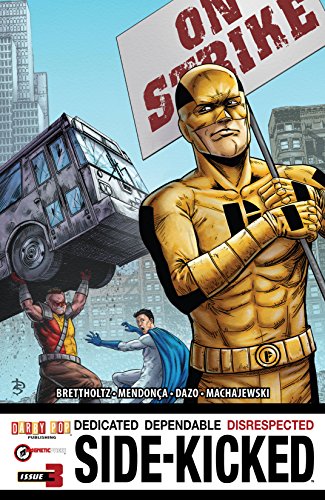 In the wake of the ongoing superhero sidekick strike, crime in the city of Chicago is skyrocketing (doesn’t sound too far from real life, does it?). Most of the “big 5” superheroes, the mentors of our lead characters, have been taken out in one way or another. In this issue we finally learn that Walter is a superhero called Frostbite, and he was the sidekick of a female superhero called Atalanta, with whom he was also in a secret relationship (and Walter resented having to keep that secret, as it was her decision), and she dumps him due to his refusal to help her. So now all that’s left in the city is Mr. Marvelous, and Dan and Richard insist that the sidekicks must continue to hold out until Mr. Marvelous asks them for help. They feel that as the biggest and most powerful superhero, they need him to acknowledge how important the sidekicks are, as that’s the only way they can avoid being taken for granted again in the future.

Not all the sidekick are in full agreement with this, which leads to some dramatic tension in the group. This leads to another cliffhanger when the villainous Board of Directors launches their big attack on Mr. Marvelous.

Another great issue from the clever creative team of writer Russell Bettholtz and artist Bong Danzo (R.I.P.). I like the story they’ve told so far and look forward to the conclusion.