GIRL WITH THE SEX-RAY EYES 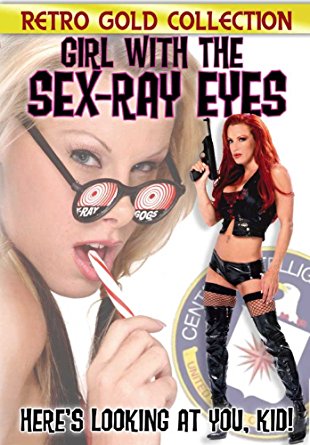 This is another spy-parody from 2007, written and directed by Fred Olen Ray. Nicole Sheridan is the titular star of the film, playing an exotic dancer named Taffy. Brad Bartram plays an C.I.A. agent named Richardson, who buys a pair of special X-Ray glasses from a Russian spy named Natasha (played by Gina Rodriguez as “Demi Delia”), and takes them back to his boss, who wants him to take them to their special lab so they can clone the glasses and use them for their spies. These glasses could be dangerous in the wrong hands, as the wearers would be able to see into Top Secret areas. While leaving the building, he bumps into Taffy, knocking over all the luggage she was carrying, as she was on her way to a Bachelor Party for a strip show. In all the confusion, Richardson and Taffy accidentally switch boxes, and Taffy gets the box that had the X-ray glasses in it, which her boyfriend, Eddie (Alexandre Boisvert aka Voodoo), discovers when she gets back home.

So now Agent Richardson must try to track down Taffy to get the glasses back for C.I.A., who has promised them to the President. Also on their trail is a woman named Mao Myx (Shannon Kelly), some kind of criminal mastermind, who had been planning on buying the glasses from Natasha, so she could then sell them to some Saudi Arabians, and sends her henchman, Vargas (Evan Stone), to interrogate Natasha, whom is being held in an underground cell, to find out whom she sold the glasses too. Meanwhile, Taffy and Eddie are using the glasses to cheat while playing cards in Las Vegas, and win thousands of dollars, completely unaware that their lives are in danger if Vargas gets to them before Agent Richardson does.

Will Taffy and Eddie survive?

Do you think anyone who watches this film cares about that?

Of course not! Y’all just wanna know how good the sex scenes were, right? So be it.

And then Shannon Kelly has two scenes, one with Vargas on a bed, and then another scene that starts off as her getting a nude full-body massage from another woman, Daisy Marie, and then becomes one of the hottest lesbian scenes I’ve seen in a softcore film (& I’ve seen a lot).

So overall it’s not bad. My biggest complaint, in addition to the short length, is that Sheridan speaks in this fake stereotypical “blonde airhead” voice throughout the film, which I guess is supposed to be funny, but I just found it annoying.

But for the Delia scenes and the Kelly/Marie lesbian scene, I’ll give it 4 out of 5 stars.

I just caught this film a couple of weeks ago on Showtime one late night. I immediately looked online to buy the DVD, but Amazon and other sites all had it out of print. I eventually found a cheap copy for sale on the auction website iOffer.com, and bought that. I just Amazon again and now it looks like the DVD is due for re-issue in April, and can be pre-ordered now.