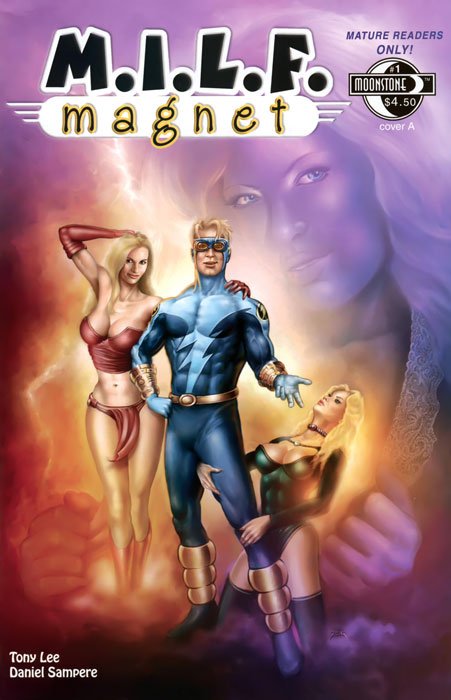 You know the kind of guy we’re talking about. It’s not his fault; he just attracts women like nobody’s business-with catastrophic results! After a magical accident during a fight with a supervillain, a young & innocent hero named TASER discovers that he now has a more specific kind of ability. Women of a certain age will ust not leave him alone…24/7. You might think that orig price a pretty cool thing, but our hero is having all kinds of trouble just getting through the day!

This little gem was released back in 2009, from Moonstone Books, and I picked it up just because, well, it’s got superheroes and sex in it, two of my favorite things. Written by acclaimed author Tony Lee and drawn by artist Daniel Sampere, this is the story of TASER, an 18-year old superhero, with electric powers. Taser is the junior member of a superhero group called the Bastions of Justice, who are made of a bunch of archtypes modeled after the Justice League. There’s SUNLIGHT (Superman with blonde hair), WOMEN’S LIBERATOR (Wonder Woman with red hair), NITE AVENGER (a middle-aged Batman), and CAPTAIN SPEEDYMAN (THE FLASH with Brown skin). The book is narrated by their associate THE ESOTERIC M.D. (DR. STRANGE, as an old perverted hippie).

Taser is not very experienced as a hero, which we can see in the opening pages as he’s clearly losing a fight in the middle of a busy city street with a supervillian called The Arcanator, who blasts Taser straight through the wall of a magic shop, where he’s hit with some kind of magical potion. As Taser suddenly finds himself swarmed by a group of women, who just moments earlier were mocking Taser for getting beaten, he realizes that something is wrong. A visit to the Esoteric M.D. reveals that Taser is now irresistible to all females. Estoteric M.D. is unable to completely remove the spell at the moment, but he casts a different spell which removes the effect on any females under 40 years old, under the mistaken belief that women over 40 don’t want sex as much, and therefor won’t be as affected by the spell. The misguided logic of that spell soon becomes apparent, as Taser finds himself in bed with two middle-aged women, after saving one of them from a mugging. The enjoyment of the ensuing threesome is soon damped as it turns out that one of the women is Sunlight’s mother. Next Taser finds himself the object of Women’s Liberator’s desire, as she is over 400 years old and therefor still affected by the spell, and she’s the kind of woman who likes it rough.

In the midst of all these, a criminal mastermind called Mistress of Evil, who has taken control of the world’s nuclear arms, and is holding the government’s hostage. And since she is an older woman, it looks like Taser might be in the perfect position to take her mind off of her evil plans…

I won’t spoil the ending, except to say that it is rather hilarious. Overall, this comic-book is not designed to win an Eisner, no one is going to compare it to a Neil Gaiman comic, but Tony Lee managed to take what sounds like, and could easily be, a completely exploitative prurient and salacious tale and actually craft a entertaining story. And Sampere’s art is very nice to look at. This book is Adults Only as it contains female nudity (just bare breasts) and acts of sex (but no penetration), so if you’re an adult, I recommend this book with a rating of
5 STARS.

UPDATE 6-8-13: Tony Lee retweeted my review on Twitter and added a few comments on the book, and his involvement:

We came out the same week as THE BOYS: HEROGASM #1 – which had more sex and nudity on one page than we had the whole book.

If you’re now intrigued by this, @comiXology has it available here – http://pulllist.comixology.com/series/2253/MILF-Magnet-Volume-1- …

Pretty cool. Although, as I said, this issue does have nudity, so I can’t really blame Moonstone for putting it in bags. At least in America. They probably wouldn’t need to do that in Europe. Anyway, now I think I need to go order THE BOYS: HEROGASM…