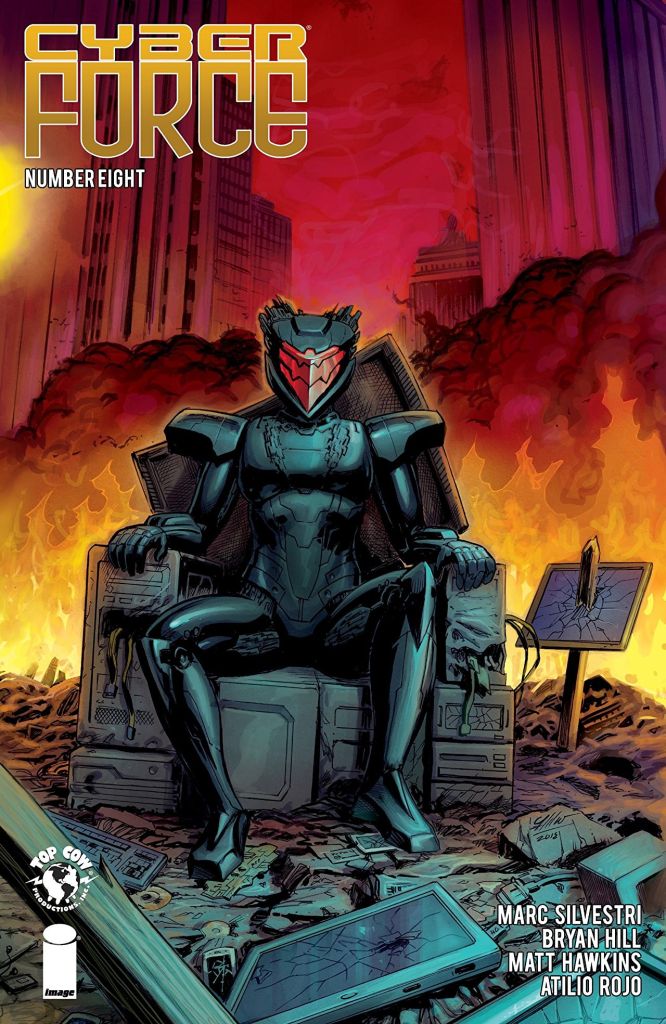 First, the global blackout that occured in the end of issue #4 is now over, and the world is in recovery mode. We’re not given an exact timeline, but it only seemed to last a couple of days. Nevertheless, even one day without electricity should have drastic worldwide effects on the human population, but we’re not given any details about that, other than a brief TV news report, which states that the UN has launched a new satellite which is supposed to protect against such an occurrence happening again, and that Cyberdata is involved in cleaning up debris from some old satellites that were damaged in orbit because of the blackout.

The focus of this issue is still in Columbia. Velocity and Aphrodite are still with Dominique who is still recovering from the emergency surgery that Aphrodite performed on her after the attack from last issue. When Dominique recovers, she doesn’t react well to her new cybernetic appearance, wishing that she’d just died instead, which leaves the other two ladies wrestling with the morality of their decision to save her like they did. I have to say that one thing I particularly like about this series is writers Matt Hawkins and Bryan Edward Hill really show the realistic reactions most people would have to be turned into cyborgs. Too often in comics, especially superhero comics, someone gets some new cybernetic limbs after an accident and they’re immediate reaction is “cool! Now I can do superhero things with my high-tech body parts!” But this series deals with the human trauma you’d expect folks to experience as they’re no longer fully human.

Meanwhile. Stryker has reconnected with Ripclaw, who explains to him that the man who attacked the camp is named LEVIATHAN. And, sure enough, Leviathan attacks them again, and this battle doesn’t go very well for our two heroes.

Another solid issue from this creative team, including artist Atilio Rojo, who gets to draw someone being ripped in half, among other things. This book is still going strong. Chacebook rating: FOUR STARS