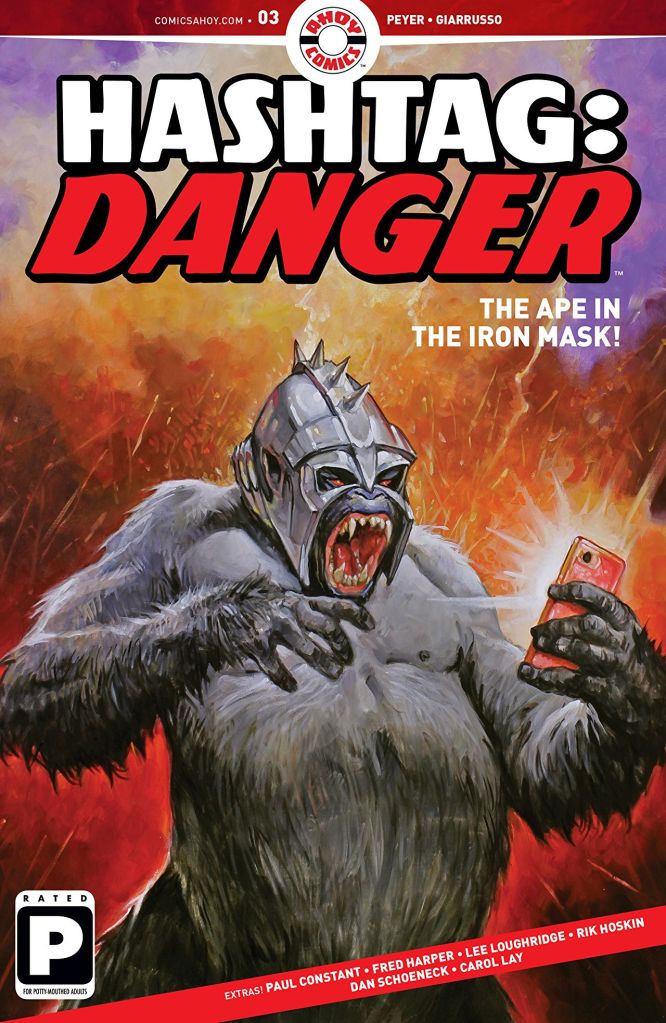 As revealed at the end of the previous issue, Desiree got the bright idea that in order to become more famous, Hashtag Danger needs to actively recruit some supervillains to fight. This issue opens with their headquarters at Danger Island under attack, but the villain turns out to be extremely ineffectual and easily defeated, which just makes Desiree mad. So Einstein claims that he knows of a supervillain that they can fight: a super-intelligent ape who lives on the moon. The trio, along with the baby yeti, hop into the Thrillride and fly off into space towards the moon. But because of the distance it still takes about 50 hours to get there. During the trip, Einstein reveals the secret background of the ape, which involves conspiracy theories involving ancient aliens who built the pyramids on Earth, the Hollow Earth theory, and the belief that the Neil Armstrong moon-landing was faked. Both Desiree and Sugar Rae think this is all nonsense, but Einstein is very confident. But when they finally arrive on the moon, the mission is not what Einstein expected.

It’s getting hard to review this series because Tom Peyer always tends to subvert the readers’ expectations, the stories never quite turn out the way you’d think, but that’s a good thing.

This issue’s edition of the backup feature SNELSON, by Paul Constant and Fred Harper, is titled WHAT’S THE DEAL WITH AGENTS? Snelson meets up with his old friend Geoff, a fellow comedian from Snelson’s early days. He was mentioned by Tabitha in the last issue, it was revealed that he’s become an Alt-Right Youtube commentator now, basically a comicsgate shill. Snelson is surprised because he remembers Geoff as being apolitical, but Geoff admits he basically just does it for the money, as it’s hard for an old White male comedian to make it these days. He tries to encourage Snelson to do the same, but Snelson is reluctant. Then Snelson recalls a recent meeting he had with his agent, which didn’t go so well, and therefore he seems more receptive to Geoff’s idea.

There’s also a scene where Snelson ignores a phone call from his ex-girlfriend Jeannie, whom he says has been calling him a lot lately for some reason. This was also shown in the last story, so I’m certain it’s not just a random detail and will be building to something. I’m surprised at how much I’m enjoying this backup feature, despite the almost 180-degree switch in tone from the main Hashtag Danger stories. But, together, this is becoming one of my favorite new comics.