Okay, this “book” that I’m reviewing today is not really a book, it’s a digital download, in pdf form. RAGS is an ongoing zombie comic-book that has been running on PATREON since January 2016, as far as I can tell. The comic was originally written by Brian Ball and Trent Luther, with Luigi Teruel on art. Although with the latest issue, number 4, Brian Ball is no longer listed in the credits, with only Trent Luther credited as writer, although the cover and inside credits list an “Honorable Mention” to “Some Other Guy”, which I assume (but can’t confirm) is in reference to Mr. Ball. Capucine Drapala does the colors, although the interior artwork is mostly in black and white, with sporadic coloring, such as the lead-character’s red hair and tattoos. It’s done to surprisingly good effect. The premise of the comic is:

A terrorist attack at the San Ysidro border has unleashed a terrible plague across the state of California. Homeland Security, the police, National Guard, and military have been wrecked as they wrestled to quarantine and control the outbreak. Everything south of Los Angeles has been overrun with the majority of the populace directed to flee north to find safety. In the town of Pasa Robles lies National Guard base: Camp Roberts. An old World War II training base now turned into a refugee camp. But Pasa Robles, small town that it is, is overrun with carriers of the plague. Trapped in that town is U.S. Marines Corp. veteran Regina Ragowski. She doesn’t care about the plague. She doesn’t care about safety. All she cares about…is finding a comfortable pair of pants.

Also interesting is that the lead character, Regina Ragowski, whom I initially assumed was nicknamed “Rags” & that’s where the title comes from, but I was corrected in the comments after I first posted this, is visually based on a real person, Liz Finnegan.

This post is in my Erotic Comics section because, while the story itself is not sexual in the nature, it features copious amounts of female nudity, as Regina begins this story wearing a two-piece string bikini, which is not the ideal outfit to wear when surrounded by zombies, and that quickly comes off. We see her both topless and fully nude a lot. The comic comes in both censored (with the naughty bits covered) and uncensored version. This collection contains the first 3 issues (plus a prologue) in one 92-page pdf. So now I’ll rundown the issues in this collection. There will be some spoilers ahead, but nothing that should really affect your enjoyment of the story, in my opinion.

In these first 13 pages, we start right in the middle of the action. Regina, in her string bikini and sneakers, is walking through the deserted city with a machine gun, with no bullets. Then she finds herself nearly surrounded by a zombie horde, her top comes off she runs from them. She comes across some kind of general merchant store, which has a group of men in it who are scavenging for supplies. Regina bangs on the window, begging to be let in, the men are wary because they don’t know if she’s been bitten or not. She manages to sneak around to back and break in, now also missing her bikini bottoms.

In this 19-page story there are no clothes left in the story, but Rags gets a jacket from a teenager named Riley to cover herself. One of the men asks for her background, and we get an extended flashback sequence. Regina is riding in a car with a man named Sean, a fellow Marine and her fiance. The zombie plague has already started and they’re trying to get out of town to safety, but they’re constantly arguing. This is where we learn more details about Regina’s past, she’s clearly been through some really heavy shit that is still affecting her. She seems to be suffering from severe PTSD, and it’s caused her to make many self-destructive life choices.

They pull over to a gas station to fill up their car, and continue to argue. In a fit of rage, Regina takes all of her clothes off and throws them at Sean (it makes sense in context, trust me). And that’s when a bunch of zombies attack… 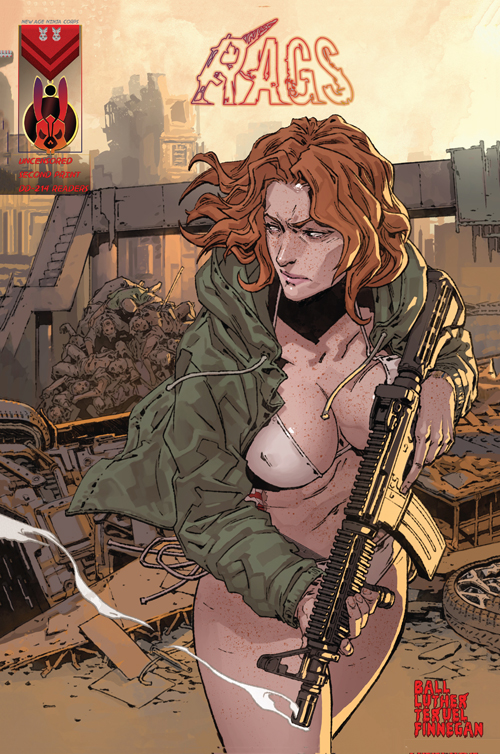 This is a 20 page story. Continuing the flashback, Regina is running from zombies and makes it toa major department store which has a group of armed survivors holed up. One of the survivors doesn’t take too kindly to Regina’s presence and tries to throw her back out to the zombies, but that doesn’t turn out too well. This is where she gets the bikini, as well as a sweat jacket, the only clothes available. While sleeping that night she has a dream of her time as a Marine serving in Iraq years ago, with her friend Rachel. And we see the incident that has lead to Regina’s current mental state. Regina awakens to find the store overrun with zombies, and has to make a hasty exit. 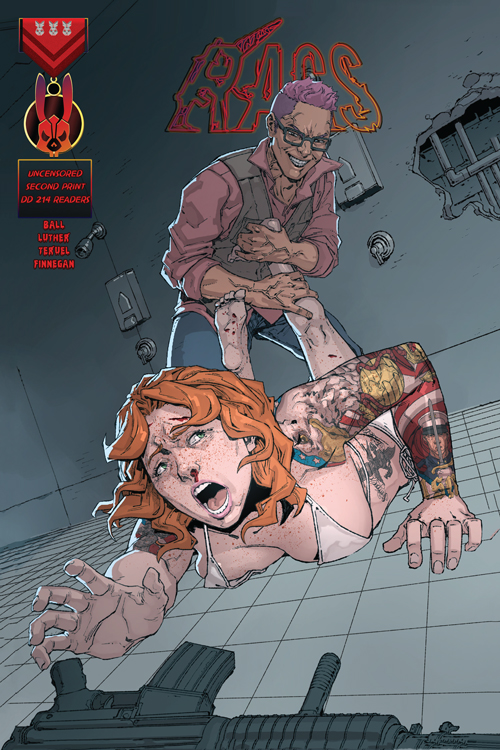 In this final 31 page story, Regina makes it to an abandoned gym, where goes to the locker room and takes a much-needed shower. But it turns out that the place is not as a abandoned as she thought, as there are two scummy dudes with guns in the building. One of them tries to rape Regina but her Marine training kicks in and she puts up one hell of a fight. She is ultimately overwhelmed, and the men decided to just leave her there, and she eventually makes her way out again, and this leads us back to the beginning of the story, to how she ended up in the merchant store.

This story is very impactful as we get an even fuller portrayal of Regina’s PTSD, which includes her seeing hallucinations. It’s done really well. I very much enjoyed this story.

The book is not without its flaws, I believe that the creators all have day jobs and fit this in when they can, so I’m kind of grading this on a curve. The artwork is a little rough in places, as is the lettering (no one is credited for that, so I don’t know whose responsible). But, damn it, I was just really really liked this! I was hooked from the first page to the last, and want to know what happens to Regina next. It’s a great book!

So if you like zombies and hot naked chicks, RAGS is the comic for you! Chacebook rating: 5 STARS

I’ll note that when I bought this collection in June, the website was also offering a download of a completed uncensored 4th issue of RAGS, which I also bought. But it no longer seems to be available from that site now, they just have the censored versions of the first 4 issues. which I suppose can still be enjoyable, but I prefer the version with nudity. So I won’t review the 4th issue here until there’s a way for the public to buy it.

But in the meantime, you can read and support the comic by signing up their PATREON or to the official website at RAGS ZOMBIE.