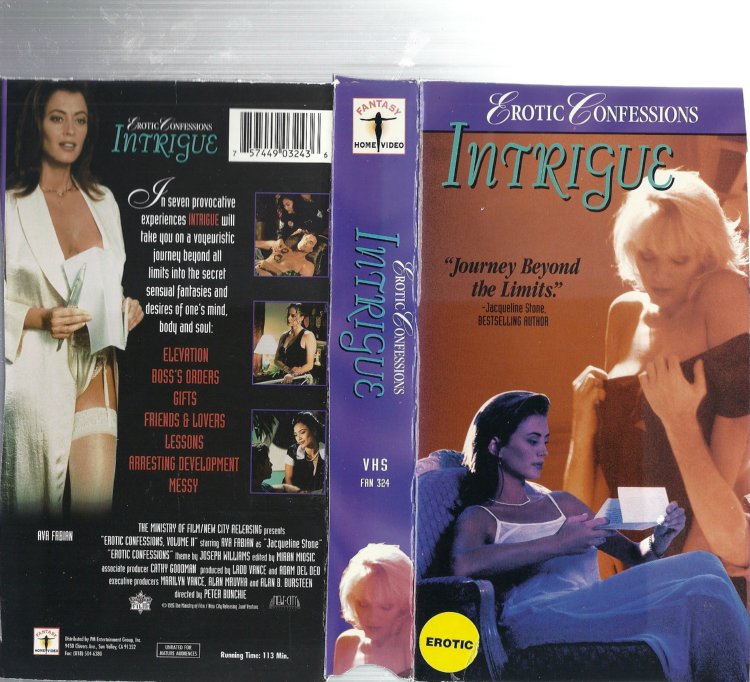 This particular dvd collects 7 episodes taken from the 2nd and 3rd seasons of the series, each directed by Peter Gathings Bunche.

Reginald Chevalier stars as Ray, a night watchmen for some high-rise business building. He spends his nights sitting at a desk, monitoring the various security cameras. Kim Yates plays an unnamed woman whom Ray says in his letter is the President of the company. One night, as she’s leaving for work, Ray sees her changing her clothes, from her business suit to a dress, in one of the elevators.

That’s right, somehow the President of the company is unaware of the security cameras in the elevators. And, apparently, there are no bathrooms in the building that she could have changed in (not to mention her own office). Nevermind.

Anyway, Ray watches her and records her changing, as she strips down to her underwear and removes her bra, before putting on the dress. But she leaves one of her shoes (having changed from flats to high heels) behind when she exits the elevator. Ray rushes to catch her and give her the shoe, at which point she realizes that he saw her changing clothes, but she doesn’t appear to mind. After she leaves, Ray goes back to his desk and watches the tape of her changing, and then he fantasizes that he and her are having a business meeting in a large conference room, and then having sex on the table.

Some hours later, the woman returns and starts flirting with Ray. She invites him to join her in the elevator where they have sex. Dona Elena Hatcher plays a friend of the businesswoman, who comes into the building and sits at Ray desk and masturbates (exposes her own breasts) as she watches them have sex via the video camera.

It’s a pretty hot episode, and notable for a couple of reasons. One is that it appears that this may have been Kim Yates’ very first professional acting role. She was credited as “Mary Cassell” here, and it’s the one and only credit under that name, with her first credit as “Kim Yates” being later this same year in another episode of this series. So I guess like many actors (especially in softcore) she chose to use a pseudonym, and Mary Cassell was her first chose before settling on Kim Yates, which she has gone on to use through most of the rest of her career. I point this all out to say that for a first time actress, she puts on a fantastic performance, both in terms of delivering dialog and performing in the sex scenes.

The other thing I find notable about this episode is that Chevalier is a Black man and Yates is White woman and, as I’ve lamented before, you don’t often see a lot of Black actors or interracial sex scenes in softcore (for the record, Hatcher is Black too). You’d think that would be a little more controversial, and therefor less likely to be filmed, 20 years ago than it would be today, yet it is still uncommon in this genre. . .

The story is about Billy (the credits on my tape are incomplete so I don’t know this actor’s name), a young legal associate. His boss asks him to take his “shy, quiet, conservative” niece out, just to have some fun while she’s in town for a visit. Billy agrees, but when meets the niece, Laura (played by Gabriella Hall), it turns out that she is nowhere as sheltered an innocent as her uncle thinks she is. Within minutes, Billy and Laura are in the boss’ office having sex (at her suggestion).
This is obviously something that Billy doesn’t want his boss to find out about, and they almost get caught when Laura unexpectedly shows up at his office again the next day in the middle of the day and tries to seduce him right there but her uncle walks in before they can get started. Then, at the boss’ suggestion, Billy takes Laura to an office party that weekend, where the two try to sneak off to have sex without being caught.

It looks like this was one of Gabriella Hall’s earliest acting roles as well, and she also did a fantastic job which previewed what a big star should would go on to become in this genre.

This episode stars William Lamar (another Black man!) as Tom, a graduate student working on some kind of scientific research. Jennifer Behr is his assistant, and fellow grad student, Naydeen. The two of them are in a relationship, against Tom’s better judgment, for some time, but they must keep it a secret because it’s against the rules of the university that they work out. Adult film star Leena plays the Dean of the university, who oversees the grant which funds Tom’s research, and she’s made it clear to Tom that she would not tolerate such a relationship. But then, due to a serious misunderstanding, the Dean comes to believe that Tom has been sending her gifts as a “secret admirer” and, despite being married, she ends up meeting Tom alone in his lab one day and coming on to him. Tom can’t resist, of course. But he does end up breaking it off with both women afterward.

Debra K. Beatty and Christopher Brewster star as Jean and Mike, two longtime platonic best friends. They’ve recently just become roommates, moving into an apartment together and immediately the sexual tension between them increases. Jean’s tendency to walk around the house topless certainly doesn’t help the situation, as Mike can’t help but stare at her voluptuous breasts (and who can blame him?). Jean also finds herself checking out Mike’s muscular body when he emerges from the shower in just a towel. One night Mike brings home a date, played by Kim Yates, and Jean gets jealous when she catches them having sex on the living room couch. When Jean later brings her own date (Scott Coppola) back home and starts making out with him the couch, Mike enters the room and kills the mood. The guy leaves and Jean and Mike get into an argument in which they finally admit their feelings for each other, and proceed to jump each other’s bones.

Very hot episode, even if it does play into the Men And Women CAN’T Just Be Platonic Friends cliché.

Peggy Trentini is Cora Jones, a wealthy but sexually frustrated housewife with two young kids. Jimmy (actor unknown) is a young man who teachers he kids how to swim. One day Jimmy comes over but finds Cora sunbathing topless by the pool. She’s alone as the husband and the kids are out camping. Cora reveals that she doesn’t know how to swim, so Jimmy offers to give her free lessons and, well, you can guess what that leads too. They end up spending a lot of time in the pool, but not swimming.

The rich housewife/young poolboy story is also a bit of cliché, but the chemistry between the two actors totally makes it work.

Craig Stepp plays Tom, a successful but single tax attorney, who comes home one night to find that his apartment has been robbed. Rebecca Ferratti plays the police officer who arrives after he calls. Sparks immediately fly between the two, but the officer tries to remain professional. She takes notes on what’s missing and leave him with her card. Tom can’t stop thinking about her, including a hot fantasy sequence where she’s interrogating him then teases him by stripping in front of him without letting him touch her. Another fantasy has him in a jail cell where, again, she strips in front of while he desperately tries to reach through the bars to touch her. Eventually, the fantasy becomes reality, as the officer arrives at his place late a night, waking him up. She handcuffs him to the bed, and then undresses, before uncuffing him so they can have sex (with her on top), and Tom discovers that he likes it when the woman is in control.

Darcy DeMoss and Tom Paris star as Alycia and Jeff, a married couple. One day while Alycia goes out shopping, she insists that Jeff clean the house, which is a mess, while she’s gone. Jeff, being lazy, decides to call a professional maid service to do it for him. Chona Jason plays Cassandra, the maid. She gets busy cleaning while Jeff is lays on the couch watching TV, but he keeps finding himself checking out Cassandra, looking sexy as hell in her little black maid’s outfit. Cassandra notices Jeff’s attention and encourages. When she finishes cleaning, she joins Jeff on the couch and they start having sex. Right as it’s getting good, Alycia returns!

Enraged, she kicks both of them out of the house and immediately calls a divorce lawyer.

Darcy and Chona are two other women that I wish had taken more softcore roles.

This is a great collection of episodes of this excellent series. Attractive actors who could also act, with decent (if not perfect) scripts. And best of all, every love scene is smokin’ (much credit to the director for that). Old fans will love it to reminisce, and new fans will enjoy see what classic softcore looked like. Chacebook rating: 5 STARS

GET THE UNRATED DVD ON IOFFER